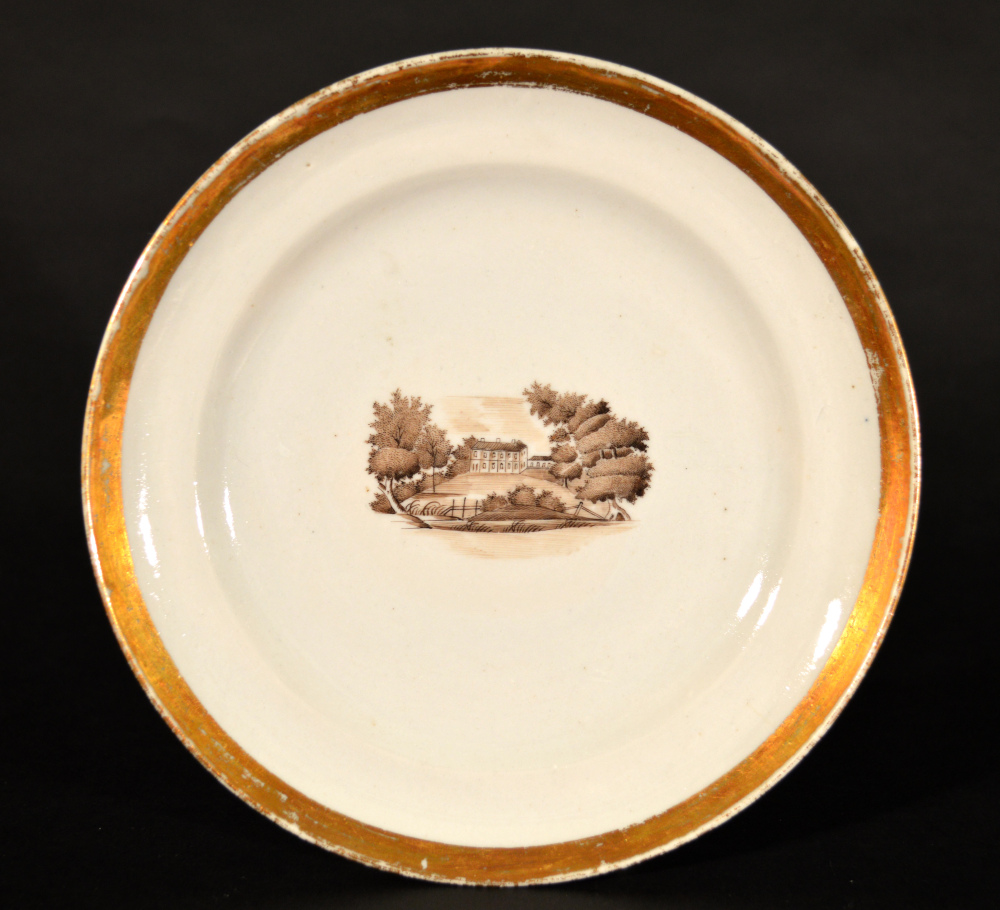 A Chinese Export American Market Porcelain with view of A Federal House.

Made for Isaac Cooper Jones, a Philadelphia merchant,

The dish is painted in sepia with a distinctive view of a large Federal building with another single story structure, maybe stables, in the back, all amongst parkland with a wide bronze gold border band.

A miniature service with this design is illustrated in Philadelphia and the China Trade and China for America: Export Porcelain of the 18th and 19th Centuries (see below) and Schiffer illustrates a milk jug without initials like this dish.  In a letter written on December 14, 1825, Dunn, a shipper in Canton wrote to Isaac Cooper Jones, For thy youngest daughter, I have sent a tea set of small China ware..  A memorandum that listed seven boxes of Chinaware sent aboard the ship for Jones included One Tea Set gilt and painted small China Ware.

This dish like a milk jug illustrated in Schiffer, page 177, does not have the Hannah Elizabeth Cooper's initials but has the same design as the initialed service and was almost certainly part of the larger seven box porcelain order made in 1825.(see below).

Traditionally this view has been identified as Rockland Mansion but as the service was made in 1825 and the Rockland Mansion came into the ownership of Cooper in 1834, the image is not, in fact, Rockland Mansion which is a much smaller & modest Schuylkill River villa with the same basic plan (three bays wide) as Laurel Hill, Woodford, The Solitude, Ormiston and Lemon Hill, which were all constructed nearby and now preserved in Fairmount Park, Pennsylvania.

Philadelphians and The China Trade 1784-1844, Pages 140-141 & illustration of tea set ordered in 1825 by Nathan Dunn for Isaac Cooper Jones for his daughter Hannah Elizabeth Jones.  Dunn was the shipper in Canton for the New Jersey which arrived with this porcelain on April 1, 1826 and the Isabella, both ships were invested in by Jones' firm Jones, Oakford and co.

In a letter written on December 14, 1825, Dunn, in a letter now in the Library Company of Philadelphia wrote, For thy youngest daughter, I have sent a tea set of small China ware..  A memorandum that listed seven boxes of Chinaware sent aboard the ship for Jones included One Tea Set gilt and painted small China Ware.

Isaac Cooper Jones (1769/70-1865) was the son of Philadelphia merchant Aquilla Jones and his wife Elizabeth Cooper.  He was named for his grandfather Isaac Cooper of Newton, New Jersey, a descendant of William Cooper who arrived in America in 1678.

In 1791, Aquilla and his family returned to Philadelphia after an absence of some years.  Philadelphia city directories indicate that soon after their return Aquilla and Isaac established a business on Market Street, and that after the death of his father Isaac continued in business alone as a dry goods merchant.  He married Hannah Firth in 1797, and they had eight children.  They purchased their summer home, Rockland, in 1815.

In 1810 Jones entered into partnership with Thomas firth. Four years later Richard Oakford joined the mercantile firm of Isaac Cooper Jones and Thomas Firth & Co. Importers of dry goods from China and the East Indies, at 84 Market Street in Philadelphia; the name of the firm was changed in 8119 to Jones, Oakford and Co.

China for America: Export Porcelain of the 18th and 19th Centuries,  Herbert, Peter & Nancy Schiffer, p 176-177 where the miniature service and other pieces are illustrated, the scene described as Rockland Mansion- Rockland Mansion was built by George Thompson on land overlooking the Schuylkill in Philadelphia.  After several owners in the intervening years, the house and twenty six acres was sold to Isaac Cooper Jones in 1834 and remained in the family until it was purchased by the City of Philadelphia in 1869.