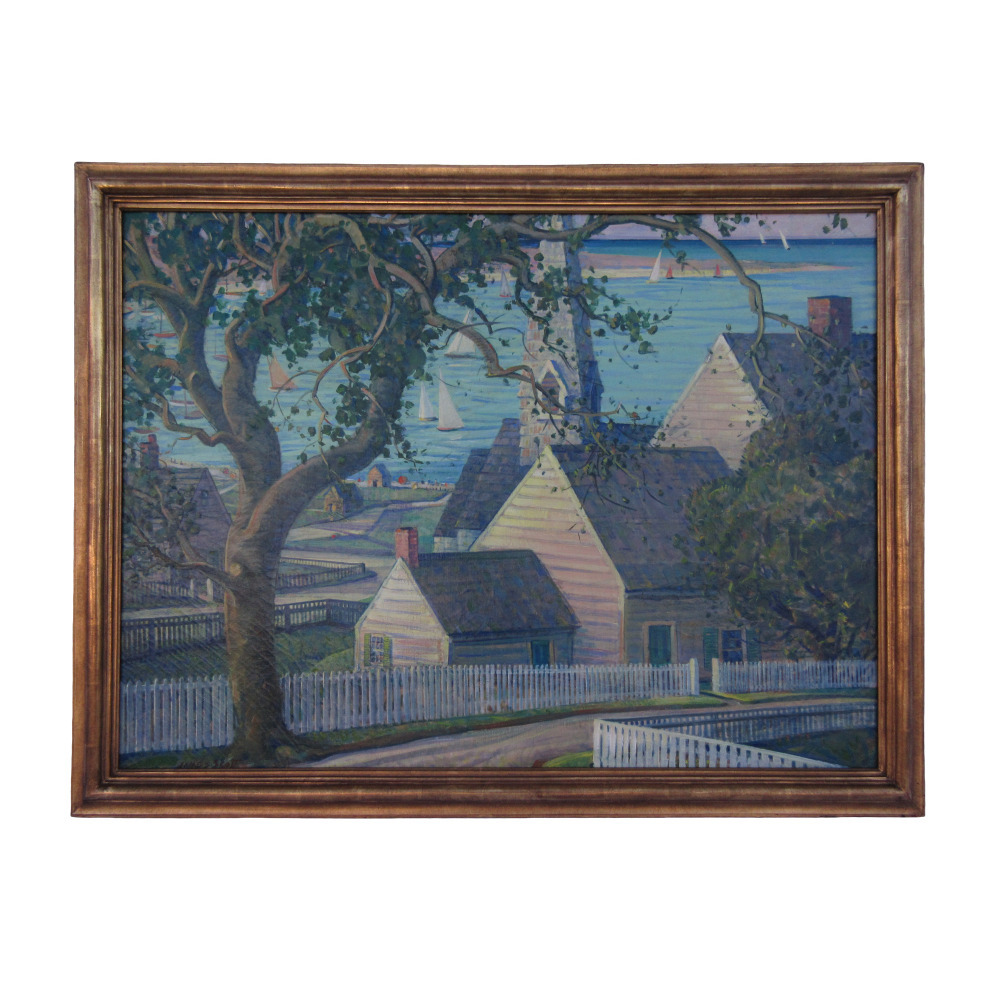 My Nantucket by James Scott

Circa 1945 oil on canvas 'My Nantucket' by James Scott (1889-1967) signed in the lower left corner, gallery markings on the backside, period gilt frame, all in excellent condition with no inpainting, no repairs to the painting. Additional photos are available.

There are four paintings by Scott in the permanent collection at the Dorsky Museum of Art at SUNY New Paltz. The collection consists of a watercolor titled “Willows in the Spring” (another view across the Hudson), and two oils on board, “Boat Races” and “Blue Hills”. ”The fourth painting of the group is an oil on canvas of the “Hasbrouck House,” one the 18th Century houses now belonging to the Huguenot Historical Society, which further connects Scott to the area.

Scott came to Milton NY in 1913 after studying at the Art Institute of Chicago, and soon became involved in an art colony there founded by a Danish artist from Racine, WI, named Anders Anderson. Anderson named the colony Elverhoj, Danish for “hill of the elves.” Other members of the group included Ralph Pierson (etcher) and Joe Popelka (silversmith). Two other artists, Otto Devereux Bacher (potter) and Will Low Bacher (etcher, designer and painter), both associated with the crafts guild known as White Cloud Farms in Orange County, were also charter members. All these artists lived at the colony in Milton, and their works were exhibited in a gallery that Anderson operated in Poughkeepsie.

As Elverhoj became more established, its name was changed to the Hudson Highland Art Association. Along with his work at the colony, Scott also studied art with John F. Carlson in Woodstock and at the Art Students League in New York City.

In 1918, Scott was called into military service, and remained in France after the war. He became as instructor at the College of Applied and Fine Arts at the University of Beaune, France, and studied art at the Julian Academy, the Académie Colarossi and the  Grand Chaumré.

Upon returning to the States, Scott resumed work at his studio in Milton. He became a member of the Salmagundi Club, exhibited at local galleries and the Babcock Gallery in New York and had several paintings accepted at the National Academy. In 1925, well-known New York art critic Catherine Beach Ely published a book titled The Modern Tendency in American Painting, published by Frederic Fairchild Sherman, in which she devoted an entire chapter to the work of James Scott. She writes of the artist, “It is refreshing to turn aside from the garish highways of aggressive modernism…to the quiet grove of James Scott’s productions. His work is the record of introspective attitude, which reveres nature instead of exploiting her…his originality is of the unobtrusive sort which finds nourishment in quiet scenes of haunting beauty.”

During World War II, Scott continued painting and teaching at his studio in Milton. Among the many works he produced during this time was a group of 12 watercolors that he did from sketches he had made during the war. These watercolors were bought by the Federal Government and exhibited at the West Point Gallery. Scott also completed a triptych of the battleship New Jersey. He exhibited at the Albany Institute of History and Art and the Charles A. Wustum Museum of Fine Arts in Racine. His paintings are in the permanent collections of the Franklin D. Roosevelt Presidential Library and Museum in Hyde Park, Syracuse University Art Galleries, Vassar College and Doane College. Along with his paintings, Scott was also known for his gifted design, metal, and jewelry work.