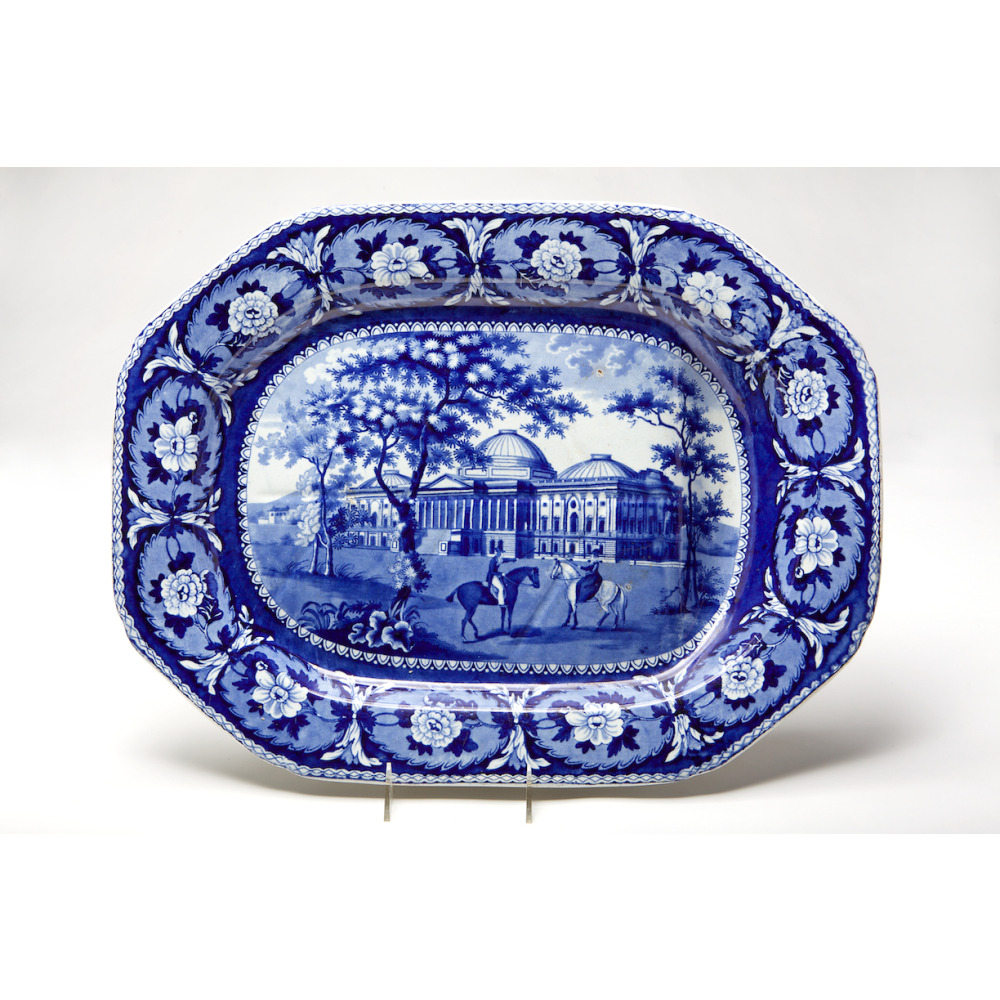 Blue and White Meat Platter with the US Capitol

WITH THE UNITED STATES CAPITOL

The octagonal earthenware platter with a repeating rose border with an image of the US Capitol building and two equestrians in the foreground.

Condition: Excellent; A two-inch firing crack appears on the back side but is not visible on the front.

"On September 11, 1822, Staffordshire Pottery owner John Ridgway left Liverpool, England, for passage to Boston, Massachusetts, where he began a two-month tour of the Eastern United States in order to procure views of major American cities and establish business relationships with American ceramic merchants.  What was unique about Ridgway’s American tour was the journal he kept beginning with his arrival in Boston on October 17, 1822, until his departure on December 7, 1822. 1 Along with gathering American views, Ridgway met with ceramic merchants and dealers in major American cities where he established business relationships and took orders for his pottery.  He was very diligent in his business dealings and found the process of establishing business relationships with ceramic merchants a challenge.... Ridgway visited many American cities including Boston, Philadelphia, Washington, Baltimore, and New York. While in each city, he took advantage of their cultural centers visiting the Boston Athenaeum, Charles Wilson Peale’s Museum in Philadelphia, the East India Museum in Salem, book-shops, public news rooms, and public buildings."

"...Leaving Philadelphia on November 7, Ridgway awoke to find himself “alongside the wharf at Baltimore, and immediately repaired to the coach office and set off for Washington, determining to pursue my route to its intent and then to take Baltimore &c on my return.” Unimpressed with the nation’s center of government, Ridgway described Washington, D.C. as a “city in embryo – of which little is to be seen save the plan….”  However, after touring the Capitol and White House, the pottery owner later chose the artist H. Brown’s drawing of the Capitol Building for transfer to the largest (20.5” x 15.5”) platter in his Beauties of America dinner service.  Brown’s drawing was engraved by Joseph Andrews and later published in Hinton’s The History and Topography of the United States of North America  published by Simpkin & Marshall in London in 1830.  It is interesting to note that Ridgway’s copperplate engraver added trees and riders on horses to Brown’s stark view."