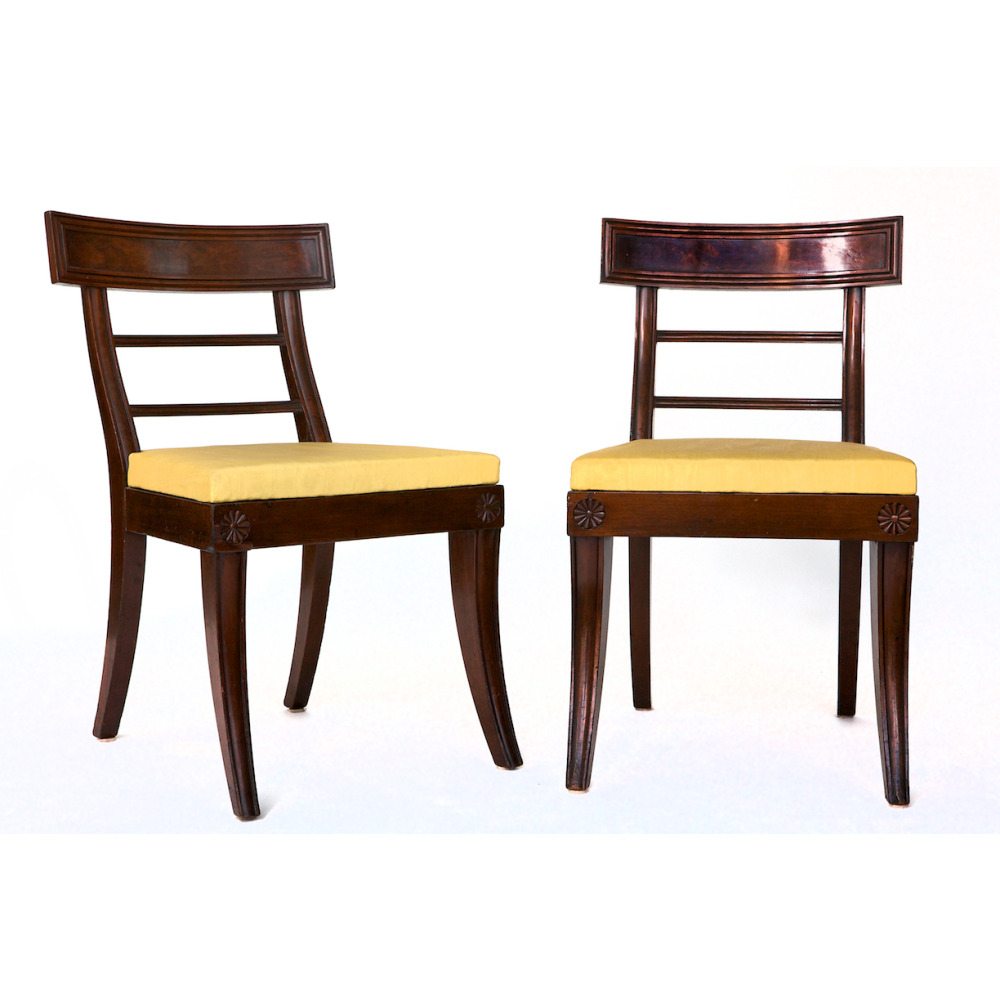 Each chair with a curving tablet crest rail with figured mahogany veneer bordered by a molded edge, above two reeded stay-rail bars held between incised styles continuing to saber rear legs.  The seat rails with carved rosettes over the front saber legs.

This pair of chairs conforms to the ancient design of Classical Greek Klismos chairs that was adopted in the late 18th century by French designers to evoke the spirit of Republicanism that fostered the French Revolution.  The example of the ancient Greek democracies and the Roman Republic also inspired American cabinetmakers to produce furniture for customers eager to live as the ancient democratic Greeks and Republican Romans had.

The inspiration for such furniture was available in French and English design directories or pattern books published throughout the early 19th century, such as those by Thomas Sheraton (1803), Thomas Hope (1807) and George Smith (1808).  Almost all chairs produced in the United States from 1807 to 1835 were based on this concept, though they differed slightly by cabinetmaker and region.  These chairs, part of a small celebrated group, are among the most "archeologically correct."

Closely related chairs to these, and probably by the same maker, are a pair of rosewood chairs with brass string and boulle-work inlay in the Kaufman Collection at the National Gallery of Art, illustrated in J. Michael Flanigan's American Furniture from the Kaufman Collection (Washington: National Gallery of Art, 1986), 138-139.  Additionally, there is another from this set at the Museum of Fine Arts, Houston's Bayou Bend and nine more from the same set at Winterthur.[1]   Winterthur also has a mahogany chair with the same carved rosettes over the front legs as the present pair and relief-carved decoration in the crest rail. Two chairs of the same basic design, one from the rosewood with brass-inlay set and another in mahogany with ebony inlay, in the collection of the Philadelphia Museum of Art.