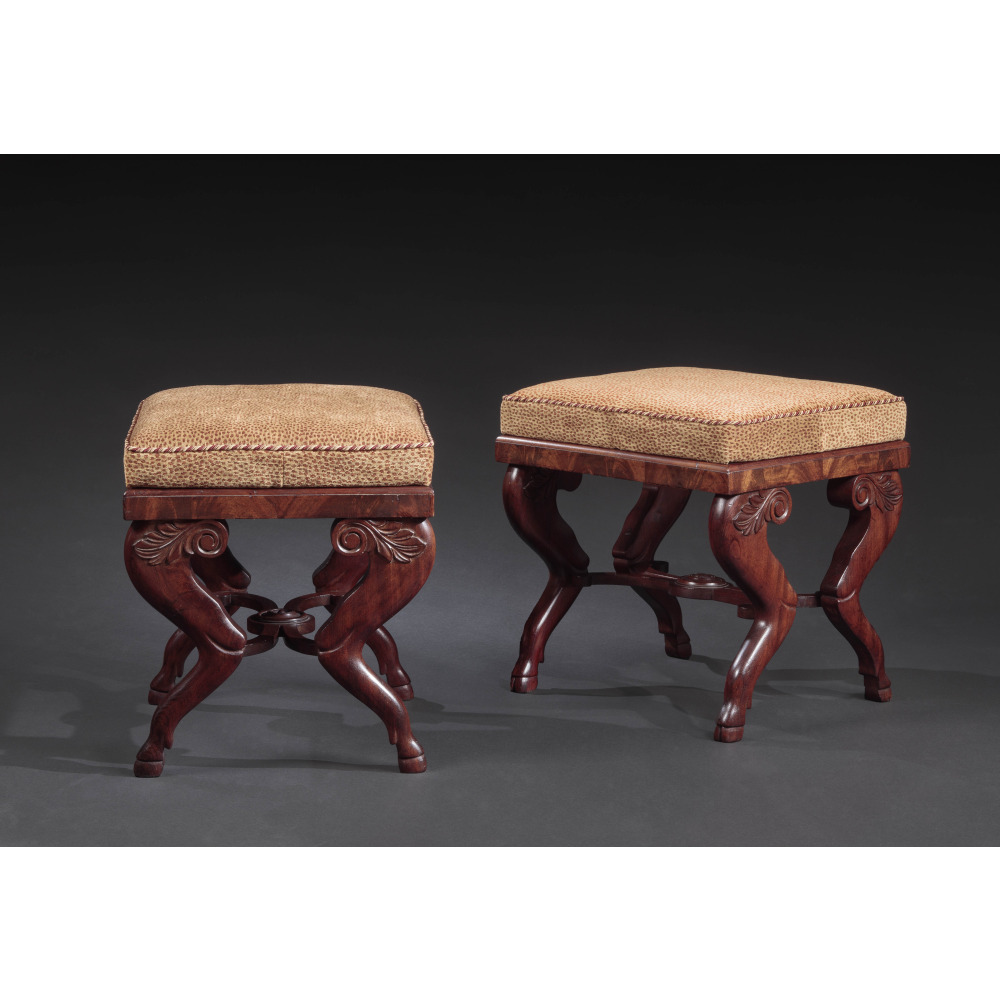 Pair of Footstools with Cloven Hooves

In the manner of Isaac Vose

Each with rectangular slip seat on a conforming veneered frame raised on scrolled, hocked legs with foliate-carved volutes at the knees and terminating with cloven hooves.  The legs connected by a curule-shaped stretcher comprised of opposing C scrolls centering a turned disk.  Secondary Wood: Chestnut.  Bearing a red painted museum accession number: A.8 . 8a & 8b

Condition: Excellent; with a repair to a break to one leg, small losses to veneer on the seat frames and minor abrasions over all have been restored, refinished with shellac in the manner of the period.  Modern upholstery over preserved original upholstery.

The use of the goat hoof in American Classical furniture is exceedingly rare.  This is not surprising as its use in both French and English design directories of the period is also quite rare.  The most likely inspiration for these footstools is an image of a small bench from the Journal des Dames et des Modes, a Parisian fashion journal published by Pierre de La Mésangère, which used fashionable furniture as props for the models.  It was published from 1798 into the 1830s.  This is plate, 224, illustrating a "Costume Parisien" was published in 1799-1800 or An 8 (the Revolutionary numbering system).  Only seven designs from Pierre de La Mésangère’s Collection de meubles et objets de goût (1796-1830), and six plates in the entire oeuvre of George Smith (a tiny fraction of the designs), make use of this foot.  Hooves appears only once in the entire run of Rudolph Ackermann’s Repository of Arts.  It is interesting to note, however, that among the rare occurrences of its use, that both Smith and Mésangère use cloven hooves on footstools and Ackermann’s single use is on a “chamber-bath” the scale and shape of a stool.

The fact that all these designs were published in the Consulat and early Empire period, between 1800 and 1809, suggests that these stools date to the teens or early 1820’s.  This is supported by carving that relates closely to carving on Boston sofas, c. 1819-1824, including multiple examples illustrated in Rather Elegant Than Showy: The Classical Furniture of Isaac Vose, such as the sofas at the Metropolitan Museum of Art (fig. 116), and at the Columbus Museum (fig. 15).[1]

One other pair of almost identical cloven-hoof foot-stools by the same maker is known.

The only other American use of this foot that is known to us is a pair of New York window benches dating to c. 1815 in the manner of Duncan Phyfe and a small marble-top stand, often attributed to Honoré Lannuier,  relating to the Ackermann “chamber-bath” and a drawing by Mésangère of 1805.