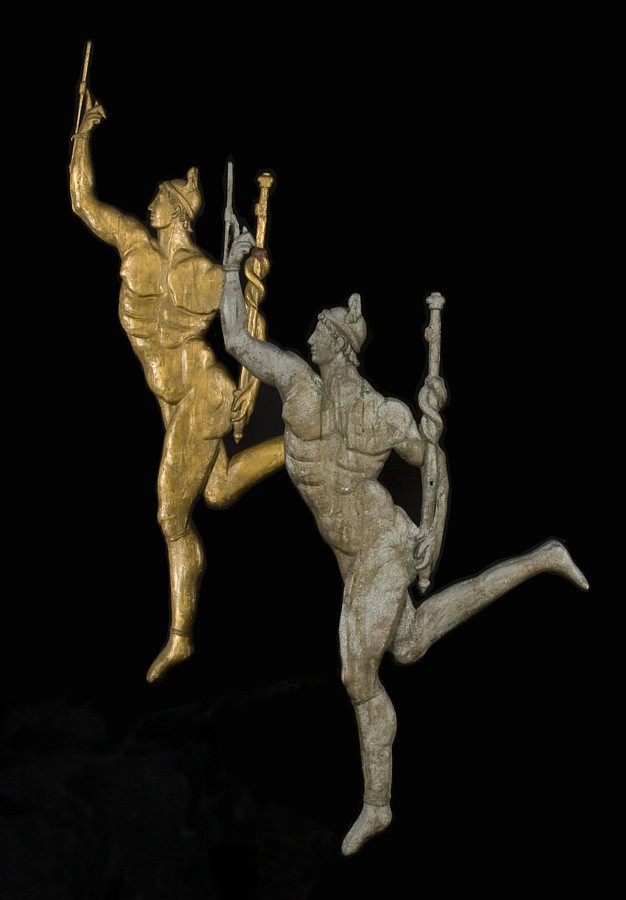 WEATHERVANE IN THE FORM OF THE GOD MERCURY, ACCOMPANIED BY ITS ORIGINAL, CARVED WOODEN MOLD, AN UNDOCUMENTED FORM, 1870-90, BOSTON

WEATHERVANE IN THE FORM OF THE GOD MERCURY, ACCOMPANIED BY ITS ORIGINAL, CARVED WOODEN MOLD, AN UNDOCUMENTED FORM, 1870-90, BOSTON:

Some of the earliest known weathervanes were in the form of Greek gods. Discovered in a basement in Boston, a Mecca of weathervane production, this solid zinc casting of Mercury is a spectacular and previously undocumented example. Similar in theme to the full-bodied copper form by Fiske (1893 illustrated catalogue, p. 59), the contour of the foot suggests that, like the Fiske figure, there was a large ball underneath, followed by a large arrow. A blown glass lick-of-flame or small sphere would have fit over the reinforced rod that extends from the tip of Mercurys finger; this would twinkle in the sun as if it were alit. The second, carved wooden figure, in gold leaf and paint, is the original mold. Ca 1850-70.