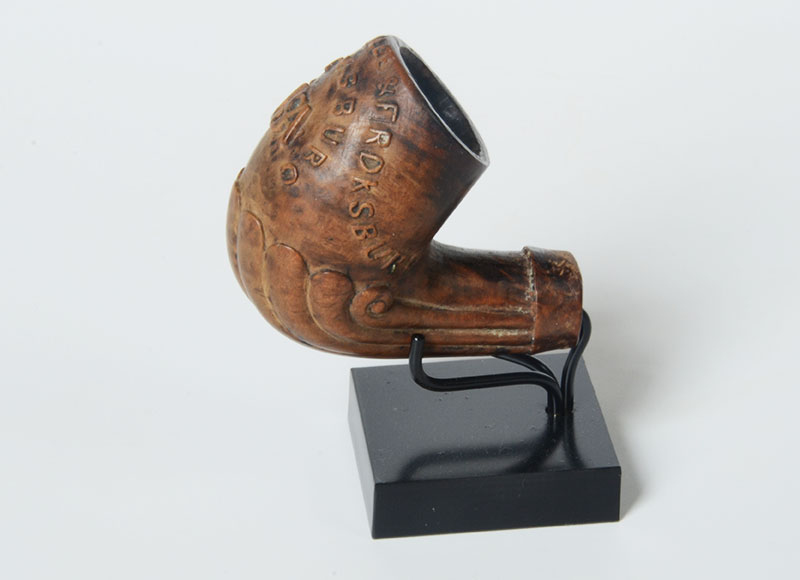 Elangantly carved folk art carved ash burl pipe with fluted tendrils and the names of three decisive battles, Chancellorsville, Gettysburg, and Fredericksburg, with a conjoined USA on the chest. The pipe retains its original surface and maintains a rich patina and a carbonized interior from use.

A type written note states, "This pipe was made from a tree root, hand carved by the Great Grandfather of Mrs. Marjorie Davis (Dodge) while he was in a Confederate prison. Civil War 1861-1865."

The battles represented on this pipe account for heavy, HEAVY casualities! The Battle of Fredericksburg (December 11–15, 1862), commanded by General Lee and Major General Burnside is remembered as one of the most one-sided battles of the war, with Union casualties more than twice as those suffered by the Confederates. The Battle of Chancellorsville (April 30 to May 6, 1863) is considered Lee's greatest tactical victory with the Union Army suffering more than 18,000 casualties, however the Confederate's General Stonewall Jackson was shot and died weeks later as a result. The Battle of Gettysburg (July 1–3, 1863) where more than 57,000 Americans from both sides died or were wounded (including almost a third of General Lee's officers) is widely considered the decisive turning point for the Union.