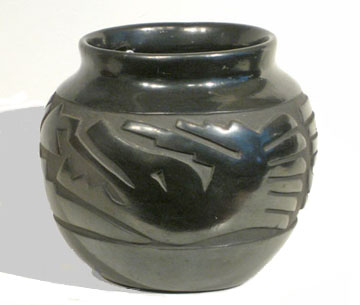 This jar was made by Camilio Tafoya. The brother of Margaret Tafoya, Camilio developed the method of incising coiled pottery made out of native clay.  This method continues to be the technique used at Santa Clara until present times.

The image that is carved into this jar is that of an avanyu, or water serpent, which was one of Camilo's favorite designs. Red clay is coiled after having been prepared and aged , slipped with a red slip, and then polished with a stone or piece of gourd. It is then incised. Incising in hand-coiled pottery is quite difficult as there is the danger of cutting too deeply and going through the walls of the clay. Camilio figured out that it was better to make the walls of the pot thicker than had been made previously and he allowed the clay to dry before cutting into it. After forming the design and sanding the incised edges, he fired the pot in a traditional "reduction" manner: over a very hot fire composed of dried dung and straw cakes, smothering the fire at the hottest moment of the fire, and poking the ashes to be sure that there were no oxygen pockets.

Camilio Tafoya later developed the sgraffito technique that became the signature method of his family. We don't know the date that this pot was made but it was likely made in the period from 1940s-1960s. By the 1980s, he and his daughter Grace Medicine Flower and son Joseph Lonewolf were making exquisite miniature pots using sgraffito.

This jar is in excellent condition.