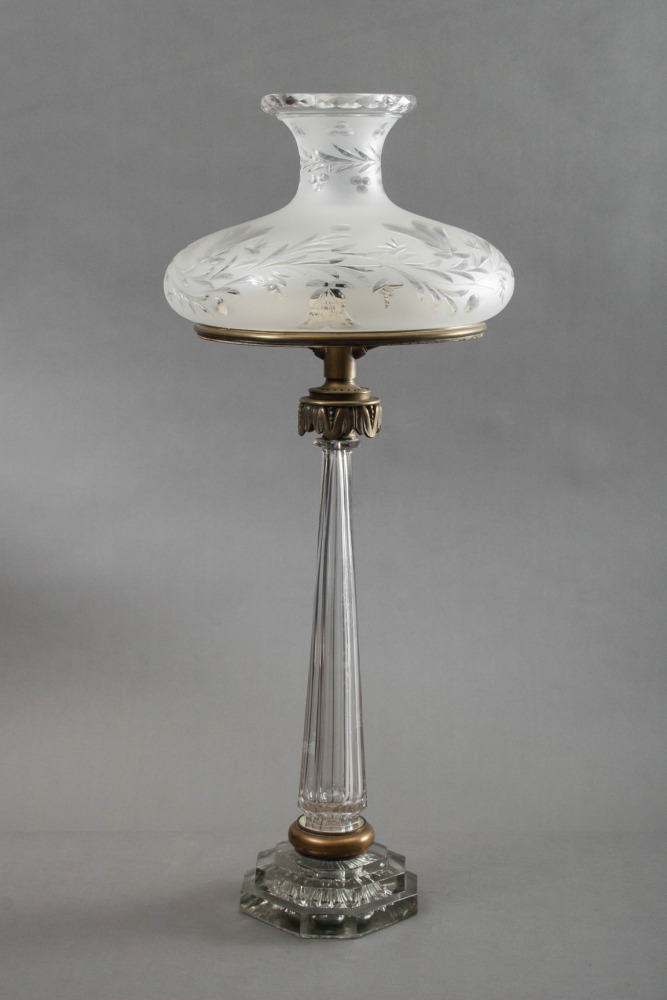 The suppressed doughnut-shaped font holding a shaped etched and frosted glass shade centering a burner tube above a cut crystal standard with a brass collar on a stepped rectangular base.

Geneva-born philosopher and inventor Francois-Pierre-Ami Argand (1750-1803), finally received a British patent for his lamps developed a few years earlier in Paris on March 15th, 1784 (patent no. 1425).  His invention which promised "a lamp that is so constructed to produce neither smoak [sic.] nor smell, and to give considerably more light than any lamp hitherto known" consisted of a tubular wick held between metal tubes, a rack and pinion wick riser assembly and a tall, narrow chimney that fit closely around the wick causing air to be drawn up through the center of the flame as well as around its outside creating more thorough combustion.  It was designed to burn rape-seed (colza) and whale oil, issuing from an oil reserve or “font” positioned so that the oil would flow from the force of gravity to the burner.

A “sinumbra” lamp, developed by 1820, works on the Argand burner principal but the "font" or oil reserve is in the shape of a flattened doughnut, allowing light to stream directly out and down through the hole onto a table without the font blocking light and casting a shadow, hence the name sin-umbra, “without shade.” The sinumbra was first developed with a shade that sat into the center hole of the font but later evolved so that the shade sat on the outer rim of the font effectively hiding the font from view.  This model is called an ISIS.