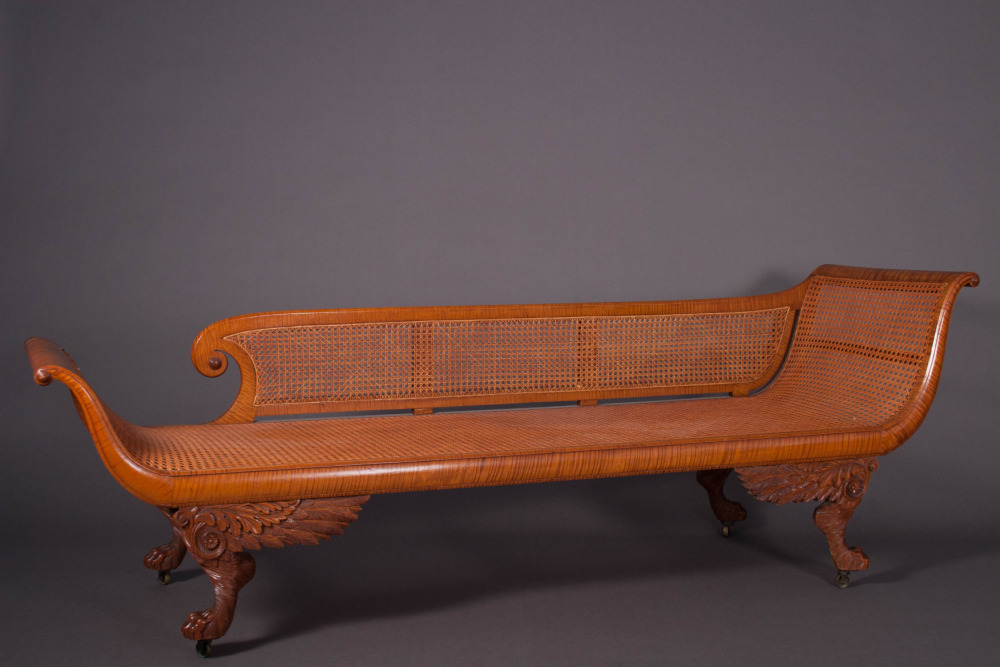 Condition: Excellent: Surface refinished in shellac in the manner of the period.

The form is derived from ancient day beds used by the Greeks and Romans to recline while eating. The bronze "fulcrum" ends of these couches survived, along with carved images from stone sarcophagi and vase paintings to inspire 18th century scholars and early 19th century designers to develop the form for modern use. The interest in ancient furniture forms gained popularity with the broad exposure of paintings by Jacques-Louis David and other pre-Revolutionary artist in Paris who used "Grecian" furniture in allegorical paintings to deliver a republican message. Famously, David's Madame Récamier was posed on a Grecian couch.

Not surprisingly, this beautiful form was subsequently explored by a host of early 19th century designers and various iterations were published. This example was inspired by designs published by Thomas Sheraton in his Cabinet Dictionary (London, 1803), and George Smith in his Collection of Furniture for Household Decoration (London, 1808).

The present example is one of a small group of grand and graceful New York couches made in figured maple with spectacularly carved feet with winged brackets. Others include a paint and stencil-decorated example at the Museum of Fine Arts, Boston and another published in The Magazine ANTIQUES in September 1975, at Hatfield Plantation, one in the private collection of William N. Banks of Newnan, Georgia, and a fourth on loan at Colonial Williamsburg.[1]