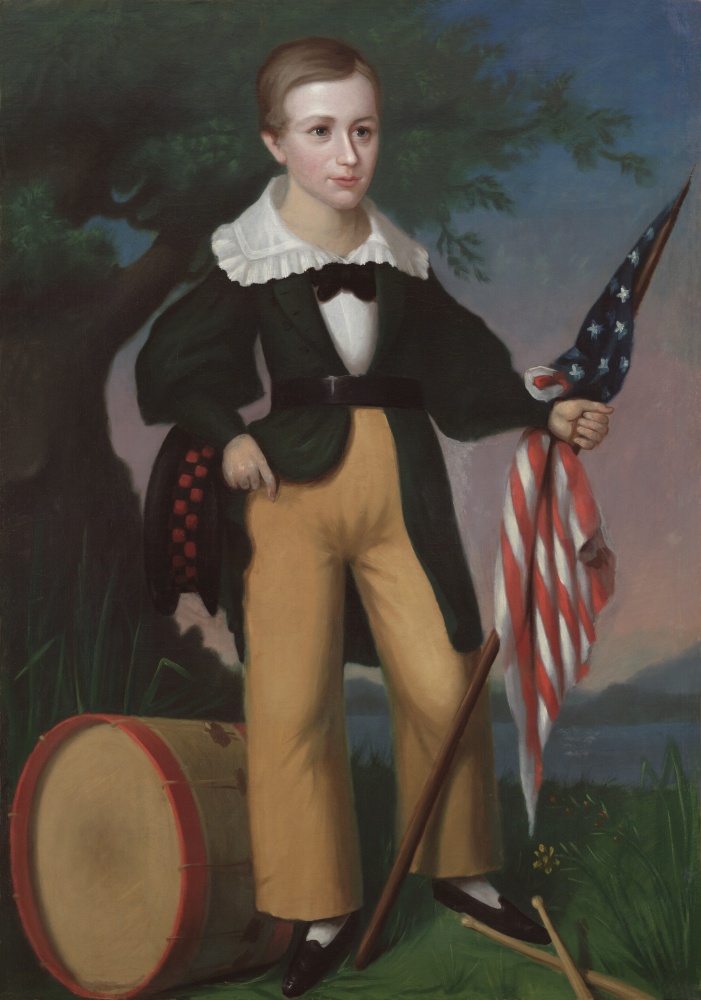 Portrait of an American Icon: The DRUMMER BOY

Northeast America, ca. mid to 3rd quarter, 19th century. Oil on canvas. Possible attribution to Joseph Goodhue Chandler. A most pleasing, bold, impactful rendering with rich color. The drummer boy clutches firmly the staff of an American flag, a strong patriotic expression. A rope-tensioned field drum and wooden sticks lie beside him. The "drummer boy" has always been an iconic figure in American history. He goes into battle with no weapon, only a drum with which to rally and encourage the troops around him. The drums were an important part of the battlefield communications with drum rolls used to signal commands from officers to troops. The life of a drummer boy appeared glamorous and as a result, boys would sometimes run away from home to enlist. The image of boy drummers were depicted in paintings, sculpture and poetry..... The stretcher retains remnants of an old label reading in part "...rear entra(nce) / NEW YORK/ ...YORK/ ANTIQUES EXPOSITION... ." The label is said to have referred to Albany at one time, indicating an exhibition in that city, possibly celebrating the Centennial of 1876. Frame size about 46 inches x 31. Excellent condition with very minor touch-up; contemporary frame. Provenance: Alice Braunfeld, Los Angeles, early 1980s; private collection. .