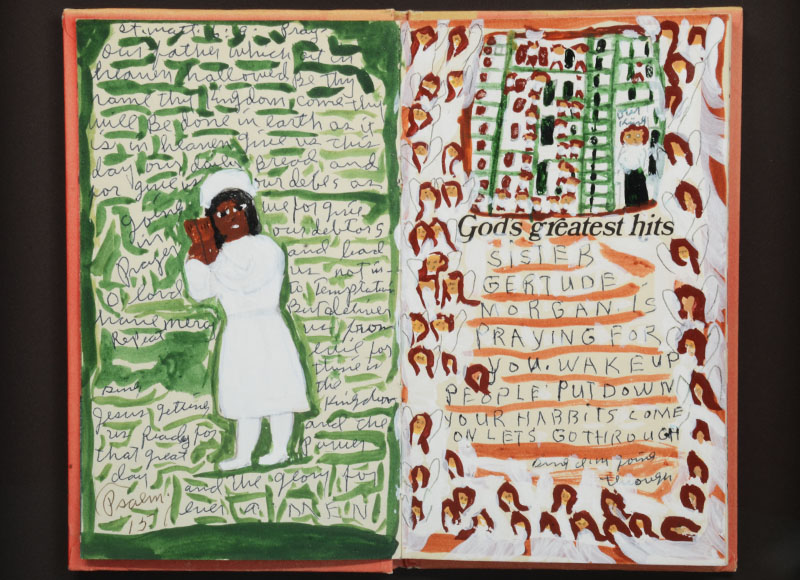 Sister Gertrude Morgan Is Praying For You

A lively work by Sister Gertrude Morgan painted on the title page spread of the book, God's Greatest Hits. The left page incorporates a self portrait framed within a hedge-maze of verse from the Lords Prayer (Matthew 6:913) and on the other page illustrates a host of angels floating around a birds-eye-view of a church.

[from Wikipedia] Sister Gertrude Morgan (1900-1980) was a preacher, missionary, artist, musician, and poet who worked in New Orleans in the 1960s and '70s, notable primarily for her folk art.

She was born in 1900 in Lafayette, Alabama, and moved to Columbus, Georgia at the age of eighteen. She was married to Will Morgan in 1928, but at the age of 38 thought she heard a voice from God telling her to become a street evangelist. She left her family and husband to move to New Orleans, where she organized an orphanage with two other missionaries.

She believed God told her to begin painting in 1956, and in 1957 thought she heard a voice telling her that she was the Bride of Christ. Thus she adopted a white habit and moved out of the orphanage to establish "The Everlasting Gospel Mission" in the French Quarter of New Orleans.

She painted in order to create visual aids for her preaching, and her paintings use a colorful religious iconography. Some of her favorite subjects are the Book of Revelation and her and Jesus flying in an airplane, this last accompanied by the poem "Jesus is my air Plane." She painted on whatever was at hand, including styrofoam trays, window shades and even toilet paper rolls.

Her art brought her fame and notoriety, and in 1974 she announced that the Lord had ordered her to cease painting in order to concentrate on her preaching and poetry. She died in 1980.

In 2005, the New Orleans Museum of Art presented the first comprehensive collection of her art.