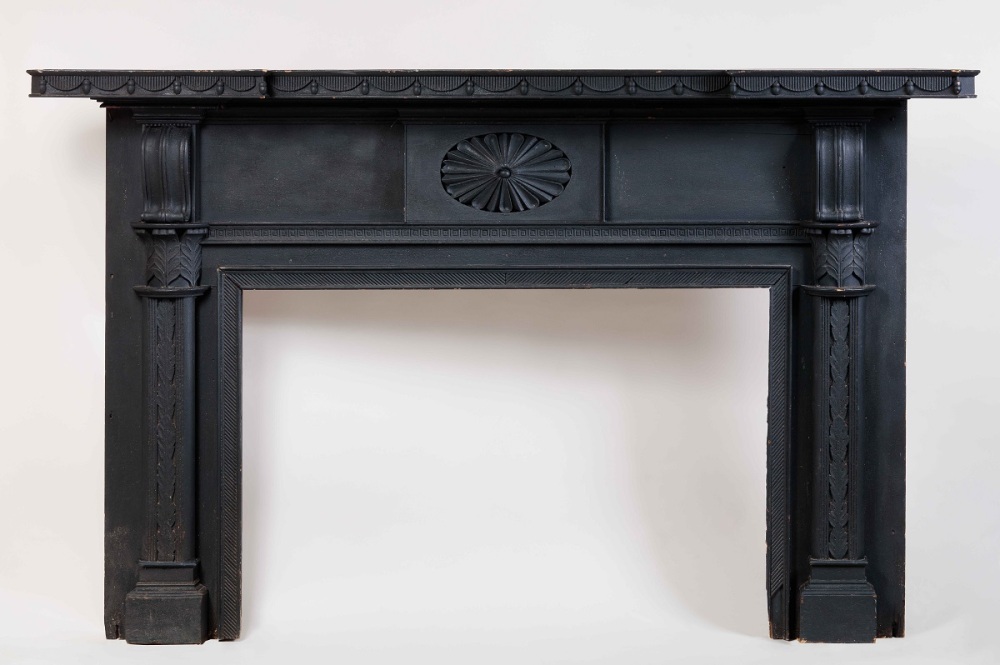 The shaped mantle shelf with applied tambour drapery swags on its front edge, above a cove molding above a frieze with a central fan-carved oval rosette above a framed fire box opening, flanked on the jams by corbels (consoles) above reeded engaged columns with counter-sunk leaf carving, foliate capitals and stepped bases.  The mantelpiece retains its original black painted surface.

This mantle was rescued from a house built by Isaac Powell on Main Street in Laurens, New York, near Oneonta.  Powell, a talented local builder, was responsible for constructing several houses in the town, c. 1815-1840, which were characterized by sophisticated "four-square" construction, elaborate detailing and Federal features, including related mantelpieces.  Some of Powell's most elaborate work is seen in one of his own homes, the Mayall-Powell House on the outskirts of Laurens, which is included in Landmarks of Otsego County.[1]  Powell is believed to have also built and lived in the Main Street house from which this mantle was removed.  Similarities between the construction and mantelpieces in both houses supports this contention.

It is easy to see the influence of the designs of Robert Adam (1728-1792), as published in London throughout the 1770s in his Works in Architecture.  Adam, the most influential architect and interior designer of the 18th century, brought Roman classicism to England and Scotland through his publications and the redesign of the houses of the English nobility.  He also inspired architects and builders on the Continent and in America.  Powell offers both a whimsical and sophisticated interpretation of Adam for a remote and rural market.  Powell was inventive and creative in other ways, as well.  According the Journal of the Franklin Institute of 1835, Powell was issued a patent for a waterwheel in July of that year.