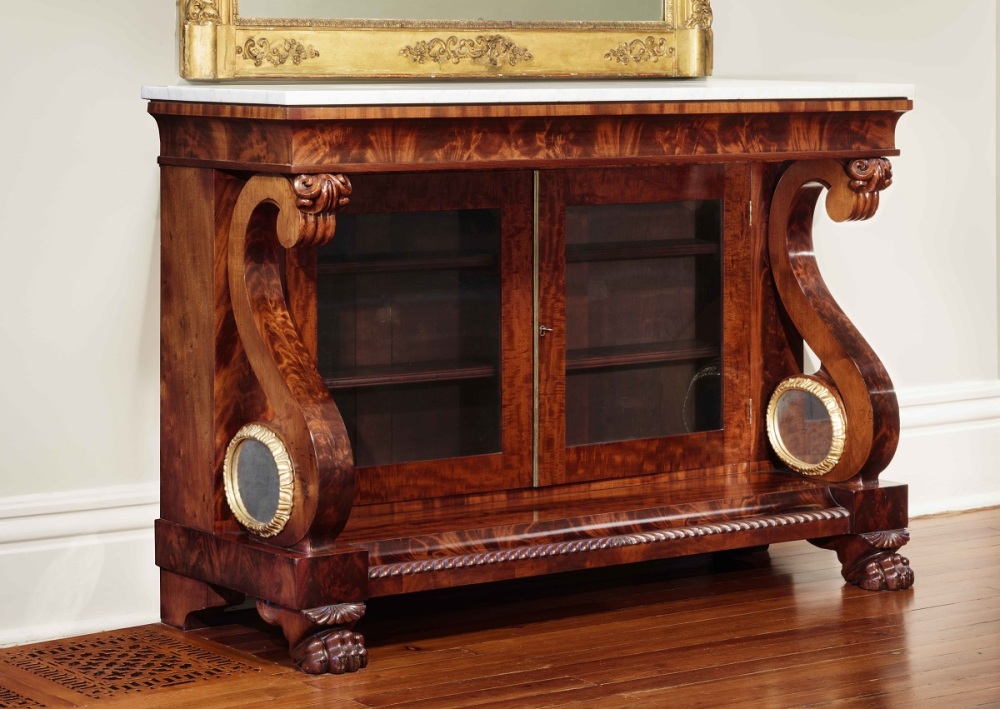 With oblong Carrara marble top above a conforming cavetto frieze, supported by scrolled supports with elliptical mirrored bosses with lotus carved and gilded frames, flanking a pair of glazed cabinet doors with brass astragal, opening to a shallow cabinet with two shelves, on a straight plinth with a concave cove front edge with gadrooning, raised on acanthus-carved lion's paw feet.

In 1833, Isaac Jones made a highly impressive suite of gilt-stencil decorated mahogany and rosewood bedroom furniture for his client Elijah Van Syckel (1788-1855), a wealthy wine and liquor merchant, comprising a tester bedstead, bed steps, pair of armoires, bonheur de jour, dressing bureau and marble-top wash stand.[1]  Although the present table has elements in common with furniture made by other Philadelphia makers, it is noteworthy that both the scroll supports of this table relate to the documented Jones/Van Syckel wash stand, and its lion's paw feet relate closely to those on the Jones/Van Syckel dressing bureau.  This double connection to Jones's work offers a compelling argument for tying the present commode to him.  Jones appears in the Philadelphia city directories from 1818 through 1840 at various addresses but was located at 75 and 77 North Front Street in the 1830's when this commode and the Van Syckel suite were made.

Plate CII in George Smith's Cabinet-Maker and Upholsterer's Guide (London, 1826 [1828]) is the likely inspiration for this commode.  It illustrates a cabinet with scrolled pilasters of related design to the present example, except that the Philadelphia cabinetmakers tended to invert the S scroll supports putting the large scroll at the base. Smith describes this form as a "Drawing Room Commode," “intended for filling up the piers between the windows of a drawing room.”   T-P-GEB-183106