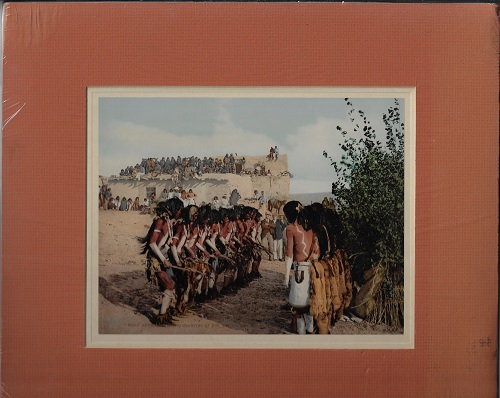 Jackson, William Henry. 53813 ANTELOPE PRIESTS CHANTING AT KISI, MOKI SNAKE DANCE. Detroit Photographic Company, 1902. Photochrome . photos is  91/4 x 7 1/2 inches,  matted 14 1/2 x 13 7/8 inches. Started by publisher William A. Livingstone and photographer Edwin H. Husher in the late 19th century as the Detroit Photographic Company, it later became know as the Detroit Publishing Co. Among the photographers which they represented was William Henry Jackson who joined the company in 1897. This photo was produced through the photochrome process in 1902. The photo was taken in the plaza at Old Oraibi on Third Mesa with a group of onlookers, in front of and on top of the pueblo. Old Oraibi (Orayvi) is believed to be the oldest continuously inhabited community in the United States dating back to 1150. "At near sunset of the eighth day a public dance of the Antelope priests takes place in the plaza, similar in many respects to the Snake Dance, except that corn stalks are carried by the priests instead of snakes." George Wharton James.