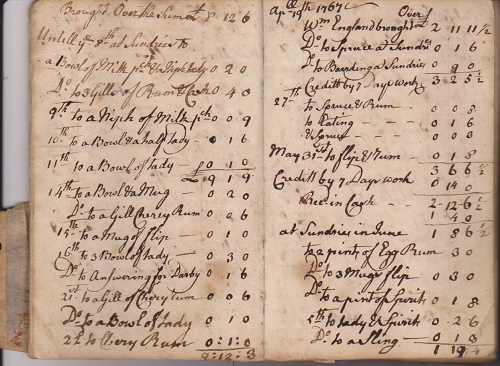 Handwritten volume originally owned by a pair of early tavern keepers, first Dennis Skehan of Boston and later John Flynn of Halfmoon, New York. The volume's entries range from the late 1760s to the early 1770s and are chiefly tavern related. Entries include mugs of flip (beer and molasses concoction popular in the colonies), spirits, liquor, glasses, gallons, gills, bottles, and barrels of rum, schipples of rye [whiskey], liquor and housekeeping, milk punch (combination of brandy and milk popular in the colonies and a favorite beverage of Benjamin Franklin), wine, mugs of beer, eating and liquor, etc.

Notably, among customers served at the tavern was a "[Native American] Indian Male". Dennis Skehan married Mary Callonan in Boston in 1758, seven years prior to his ownership inscription of 1765. His wife Mary Skehan also appears in book as the pair worked together in their Boston tavern from the late 1760s to the early 1770s. In 1772, New York tavern owner John Flynn's name appears in book as he records a pair of transactions involving New York currency. He also makes note of Dennis Skehan's passing in 1771, suggesting the two knew each other and may have had tavern related dealings with one another.

The patriarch of the Flynn clan in Saratoga County, New York was John Flynn (1727-1817) who owned a tavern in Halfmoon. Records refer to his establishment alternatively as a tavern, hotel, and public house, so patrons ostensibly ate, drank, and slept there. Records also show that John Flynn "settled along the Hudson River in the 1750's and opened a tavern [in Halfmoon] that he kept until Revolutionary War activities forced his temporary move to Albany." (see Living Places, Halfmoon Town History online). After the war ended, he relocated his tavern back to Halfmoon and by the year 1788 he was one of a number of public house license holders in that town. (see A Descriptive and Biographical Record of Saratoga County, New York, 1899, p. 91).

Expected amount of wear and soiling to vellum, vellum detaching from top board; toning and foxing to interior, 1 page detached and laid in. Overall a good tavern manuscript ledger of a subject not readily found.