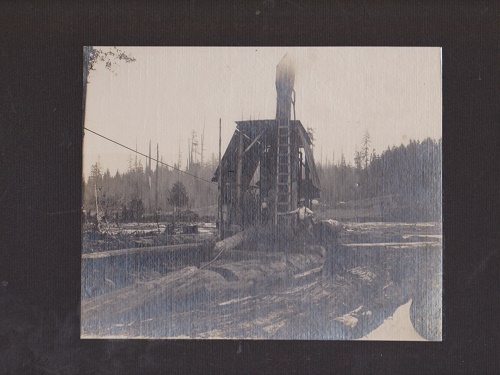 Palmer, John L. & Palmer, Orville. Four excellent silver gelatin photographs of logging in Whatcom County, Washington at the end of the 19th century, and first decade of the 20th, showing Palmer setting on old growth log, standing with his young son Orville on a steam donkey in the middle of a log holding pond, Orville sitting inside a cut of a giant Western red cedar, and finally John, Orville and other loggers standing on logs in holding pond with steam locomotive in background. Bellingham, WA: Peter L. Hegg, Photographer, [ca. 1898-1905]. Four silver gelatin photographs, 1 sized 7.25 x 9 in., 3 sized 6 x 8 in., all mounted on thick gray studio boards, 3 embossed w/ Hegg stamps at lower left corner, all w/ annotations in ink below the images at the lower margins. Excellent images with great contrast. These photographs chronicle the logging career of Jack Palmer (1872-1920), a logging camp foreman from 1900 through 1920 in and around Bellingham, Washington. The first photograph which contains the Hegg Studio stamp for Whatcom County shows Jack Palmer setting atop a giant Western red cedar with another logger standing below, and although the ink annotation below the image indicates it was taken in 1900 when he was 26 years old, according to census records, and directories, it probably dates to 1898. The other three images show John Palmer and his son Orville (1900-1969) standing with other loggers on a steam donkey which is yarding logs into a holding pond, with young 5 year old Orville holding onto the cable; the next shows Orville sitting at the base inside the beginning saw cut of a giant Western red cedar with circumference over 30 feet; and last image shows the two standing on logs in a holding pond as loggers are polling them over to be loaded onto the logging train in the background. Palmer was the son of Norwegian immigrants, whose father farmed in Coos Bay, and then worked as a logger, and then logging camp foreman until his death in 1920. Peter Hegg (1864-1942), immigrated from Sweden to Whatcom County in 1881, and by 1888 was working as a photographer with his brother Eric A. Hegg (1867-1947), who left the photography studio to be run by Peter when he left for the Klondike Gold Rush in 1898. Peter Hegg continued to operate as a photographer until after he returned from Cordova, AK before World War I, and then became a farmer until his death.