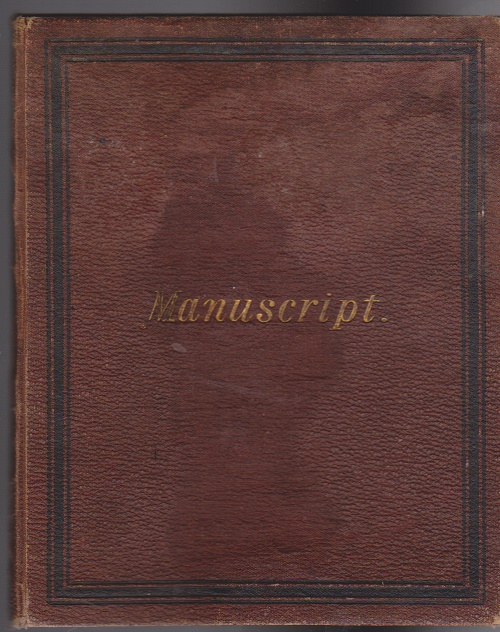 (Canada - Ontario - Windsor Boat Club Records & Acrostics) Record book containing the rules, membership, and minutes of the Windsor Boat Club, Windsor, Ontario (1874-1875) and poetry by Sophia M. Fleming, the mother of one of the Club's members (1880). Booklet bound in purple cloth covered boards, marbled endpapers; 8" x 6 5/8". The volume contains two distinctly different components. The first is the records of the Windsor Boat Club which contains a list of its members; an account of tickets for Honorary Members; the Rules of the Club; and meeting minutes from December 1874 through December 1875. The members, all male, were limited to eleven at any one time. The membership list includes: Allan McCrae, Edward Stone, Arthur G. Smith, Noble Bartlet, Charles Sullivan, George Latcham, Lloyd Thomas, Robert Sutherland, Nelson Clinton, Frederick Scott, Donald Fleming, Carlisle Johnston, John Jeffers, Thomas Hirons, and Colin Porter. The minutes are fairly routine, although they do make mention of agreeing to buy a ten-oared barge, providing refreshments for special community activities, and arranging a moonlight cruise on the steamer "Fortune". After the resignation of the first Secretary, Donald Fleming became the recording secretary for the second half of 1875. After 25 pages of entries relating to the Windsor Boat Club (which end on December 13, 1875), the next entry is by Donald Fleming's mother, Sophia M. [Harwood] Fleming. It contains a gem-sized tintype of Donald and a poem by her dated March 24, 1880 regarding his death. A biography of another son, Oscar E. Fleming (later mayor of Windsor from 1891-1893) indicates Donald died in 1881, but the date in this book is 1880, as are all of Sophia's other dated poems. Most of Sophia Fleming's manuscript poems, which comprise the second component and 34 pages of the volume, are written as acrostics, where the first letter of each line spells out a word or name. As a result, the names of the poet's children were determined. For instance, a poem entitled "To my daughter on her birthday" spells out Lilla Fleming; and "To the dear memory of my son" spells out Donald Fleming. She also wrote acrostics for her other children: Harwood, Felicia, Florence, Evelyn, Clarence, Oscar, and Bertha. Her 10th child's name was Arthur. There are several interesting memorial acrostics for non-family individuals, including "Written on seeing the photographed coffined remains of a young lady of Ottawa" [which spells out the name Sarah O'Connor]; "To the memory of one of Canada's ablest Statesmen" [which spells out Hon George Brown]; and "To the memory of one of the life saving crew who so sadly perished April 28 / 1880" [which spells out Walter Pelterbridge]. All of her dated original poems were done in 1880. On several accounts, a very interesting piece, particularly as a literary family document. The covers and top edges of the interior pages show evidence of being damp some time in the past; front interior hinge is weak. Still, the club's entries and Sophia Fleming's poetry are written in very readable hands.