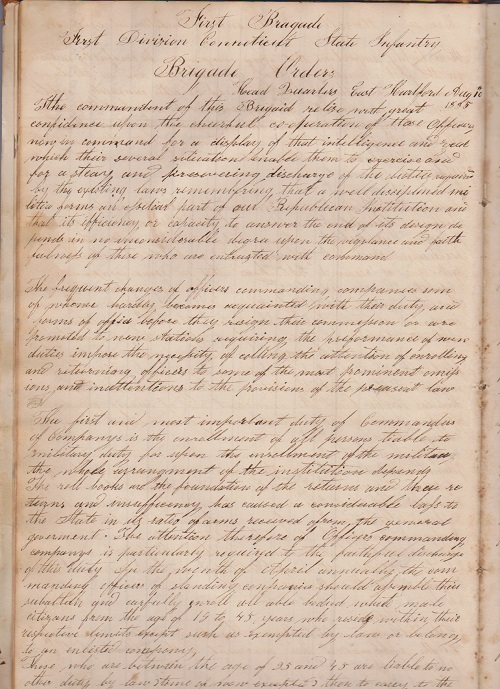 An original document of the Connecticut Militia from 1835 – 1846 in which hundreds of the soldiers and their officers are named. Quarto. This manuscript contains 142 unnumbered pages consisting chiefly of official records of regimental, brigade or company orders of soldiers of the 7th Company, 6th Division of the Connecticut Militia. The entries are filled in by numerous hands including Brigadier General, George C. Owen who became a postmaster in Connecticut. Laid in are several documents 1) 1 ALS, order for the Treasurer of Portland to pay George W. Pettis for storing state muskets, 71 in number, ...September 8, 1845; 2)1 ALS J. Barratt, M.D. declares John O’Neil with a “weakness and enlargement on the right side. He is unfit for the use of musketry and therefore unfit to do military duty.” Middletown. April 29, 1845; 3) A document showing military formation with listing of officers, signed by Capt. Chase on the verso; 4) a signed document for the “order for regiment to appear in Parade in Middletown on Oct. 9 ___.” Signed by Harley Case, Captain. 5) A printed company order for notice of Parade in Portland, unsigned, Harley Case, Captain of said Company. and 6) a command to Mi Geo, October 28, 1846, dated Portland for a fine of $4 for failure to appear at parade, signed by Harley Case, Captain. The ffep of the militia book is signed John C. Selden, Capt. 7th Company, 6th Regiment, Connecticut Militia Company Book, Bought May 1, 1835. The book is bound in ¾ calf over marbled boards, the spine somewhat fragile, but overall in vg cond. A significant Connecticut Militia Company manuscript book for both historical and genealogical research.

The book consist of:

1. (Manuscript) Over 130 pages of written records including hundreds of names and ranks of the militia in a period over a decade (1835-1846) containing an enormous amount of information.

2. (Manuscript) A list of 7th Reg’t members that neglected to appear according to Law that belong to the 7th Company 6th Regt on the 7th of May 1938.

9. (Manuscript) Company Order! 1837 “To either of the now commissioned Officers of the 7th Company 6th Regiment Connecticut Militia. You are hereby commanded to give legal Notice to all the members of 6th Company to appear at their usual place of parade, in front of Joseph Sage’s in Chatham, on Monday, the 1st day of may next at 8 o’clock A.M., uniformed armed and equipped as the law directs for Exercise inspection & review & to fill all vacancies. Edward C Whitmand Capt Comp

11. (Printed broadside which has been pasted into the militia record.) STATE OF CONNECTICUT – GENERAL ORDERS. NEW-HAVEN, July 31st, 1837 to JAMES T. PRATT, Esq., Brigadier General, 1st Brigade Infantry by order of the Commander in Chief, SAMUEL L. PITKIN, Maj. Gen. and Adj. Gen. of Conn. ---------BRIGADE ORDERS, FIRST BRIGADE, CONNECTICUT INFANTRY. HEAD QUARTERS. Hartford, August 2nd, 1837 “The Commanders of the several Regiments in this Brigade are hereby directed to distribute, or cause to be distributed, a copy of the foregoing General Orders to each Commissioned and Staff Officer in their respective Regiments, and the several Recording Officers are hereby required to record the same, together with this Order, at length upon their Regimental and Company Records. JAMES T. PRATT, Brigadier General, 1st Brigade Infantry.

Each of the Roll Calls list the recruits name along with the categories of Uniforms, Musket, Bayonet, Ramrod, ration box belt, pension, etc.