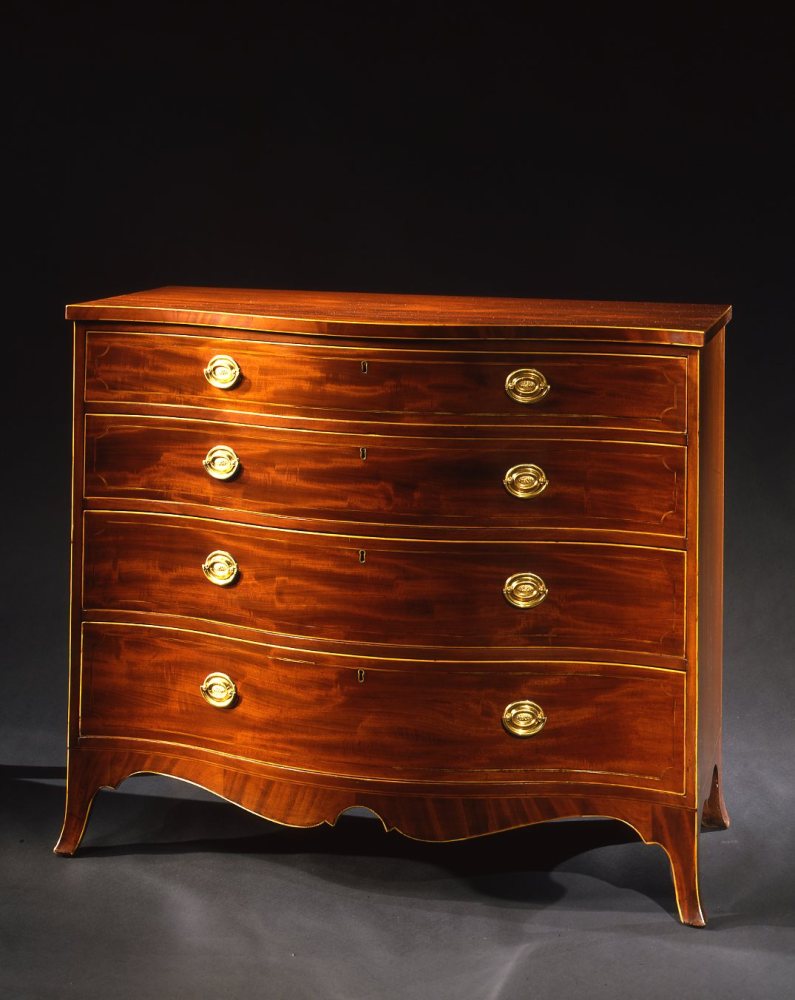 The oblong top with exaggerated serpentine front edge and string edging above a conforming case with inlaid light-wood stringing at every edge, having four graduated drawers each with string inlay and original brass bale-handle pulls with oval stamped brass back plates, above a string-edged double cyma-shaped apron extending to tall flared French bracket feet.  Below the bottom drawer is a plain triple-string inlay strip with a wider dark mid section between light wood strings.  This inlay motif is identified by Charles Montgomery as no. 66, typical of New York and New Jersey.[1]  The word “String” is inscribed in period chalk on the bottom side of the top; presumably manufacturing instructions as no person of that name is listed in the New York directory of the period.  The drawers and case bottom share a distinctive blocking technique with small 1½ inch blocks spaced at about 2 inch intervals along the front edge where the bottoms meet the serpentine front of the case. Secondary wood: Northern White Pine and Tulip Poplar.

Condition: Very Good; Back boards replaced and restorations to some stringing on drawer edges and at the bottom of the apron..  Original brasses with restored matte and burnished lacquered surface. Two shrinkage cracks in the top have been filled with wax.

The design of this exceptional bureau was inspired by plate 76 b in George Hepplewhite’s The Cabinet-Maker and Upholsterer’s Guide (London, I. & J. Taylor, 1794), Third Edition.  This design, called “Dressing Drawers,” is distinguished from a “Chest of Drawers” by having a single long drawer across the top for “dressing equipage” instead of a pair of short drawers as shown in plate 52 c.  The American cabinet maker has combined the serpentine form of plate 76 b with the cyma apron of plates 76 c and 52 c.

According to the New York cabinetmaker’s price book of 1796, a serpentine chest cost fifty percent more to make than a bow-front and more than twice as much as a straight front;[2] indicating that this form was one of the most sophisticated and costly of the Federal period.  This chest is a superior example distinguished by a deeply curving façade, elaborate and extensive stringing and exceptionally tall, fine and graceful feet.

Originally published in 1788 and heavily influenced by the neo-classical work of Robert Adam, Hepplewhite’s Guide dominated American furniture design in the Federal period.  As a result, plate 76 was interpreted all along the East coast.  Joseph Rawson, Sr. of Providence made examples closely related to the present chest, now in the Museum of Art at the Rhode Island School of Design and in the Museum of Art, Carnegie Institute, Pittsburgh.[3]  Langley Boardman of Portsmouth, New Hampshire made a related case with C bracket feet[4] and Michael Allison of New York City made related straight-front chests, examples of which are in the collection of The Metropolitan Museum of Art and Boscobel Restoration.[5]  A labeled straight-front chest by Matthew Egerton, Sr. (1739-1802) of New Brunswick, New Jersey exhibits a very closely related apron, feet and extensive string inlay.[6]

The most closely related published example to the present chest is a serpentine chest of very similar dimensions advertised by Berry Tracy in the Magazine ANTIQUES, April 1983, p. 727.  Described as “splendid,” Tracy states that the chest is in the manner of New York cabinetmaker Elbert Anderson, Sr. (active from 1786 to 1796 at No.5 Maiden Lane and from 1796 to 1803 on Duane Street).  Now in a New York City private collection, the bureau’s very similar blocking of the drawers and case indicate the same maker as the present example.

The secondary woods, the extreme refinement of the foot, the inlay pattern and lack of cock beading on the drawers suggest a New York origin.