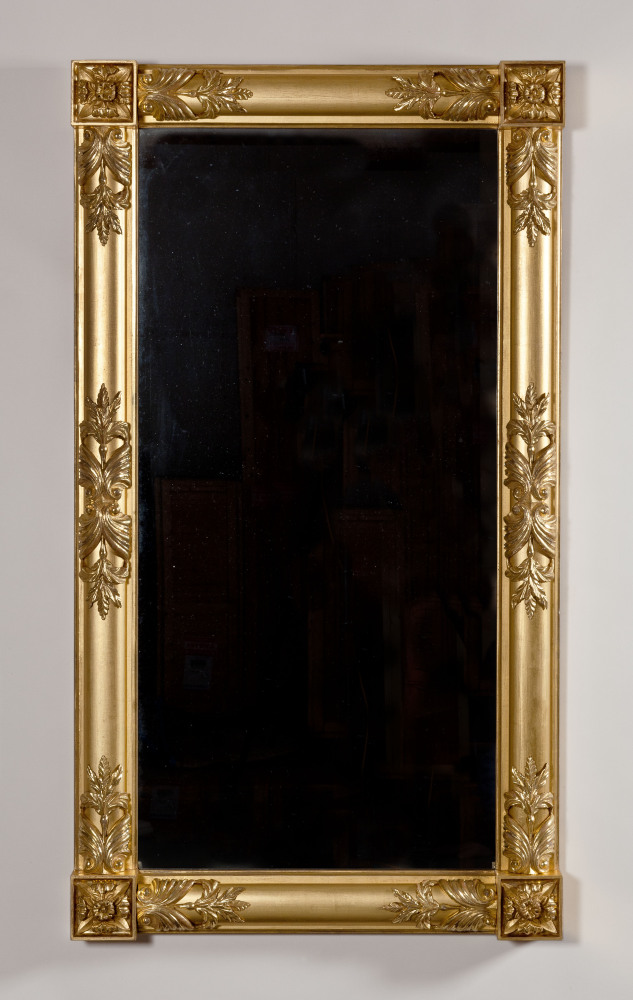 Condition: Excellent: having scattered small repairs and retaining almost all of its original gilding, original mirror plate and wood back.

John Doggett was a cabinetmaker, carver, and gilder in Roxbury and Boston, Massachusetts.  Born in Dedham, MA in 1780, Doggett moved to Roxbury to become the first gilder in that town.  He was married in March 1804 and had at least one son, John, Jr., who became an active member of the firm, John Doggett & Co.  John, Jr. died in 1852.  Doggett also had a brother, Samuel, who served as his apprentice and later business partner.  Doggett had several other apprentices working under him in the Roxbury-Boston area.  As early as 1803, Samuel Curtis and Stillman Lothrop were painting and gilding for him.  By 1820, business had expanded so that Doggett set up a new shop at 28 Market St. in Boston.  By 1822, he had begun buying and selling frames for looking glasses, prints, and portraits at 16 Market St., Boston.  In 1822, he opened an exhibition gallery, called Doggetts Repository of Arts, where he exhibited paintings by Gilbert Stuart and others.  Eventually, his business concentrated more heavily on importing and manufacturing carpeting.  He opened a branch in Philadelphia, PA under the name of Doggett, Farnsworth & Co. and another in New York with John, Jr.  Doggett retired sometime between 1845 and 1850, leaving business affairs in the hands of his brother, Samuel, and Samuel S. Williams.  When Samuel Doggett retired in 1854, the firm was reorganized under the title of Williams & Everett.

The online collection consists of a daybook kept from 1802 to 1809; a letterbook used from 1825 to 1829; and several bills, three of which are in the Miller family collection of bills and receipts (Collection 462).  The daybook records the daily activities and business associates of John Doggett, while the letterbook documents his import business.  The bills relate to the sale of looking glasses, frames, molding, carpeting, painted floor cloths, and blankets.

The present mirror could correspond to an invoice from Doggett in the Winterthur collection, to Mr. H.W. Miller dated April 25, 1829 from Doggett's Boston "Looking Glass and Carpet Warehouse/ No. 12, 14 & 16 Market St./ 1 Looking glass french plate  $25.00"  It is evident in Doggett's letters that he was purchasing mirror plates from the Royal Plate Glass Manufactory in Paris in 1825.