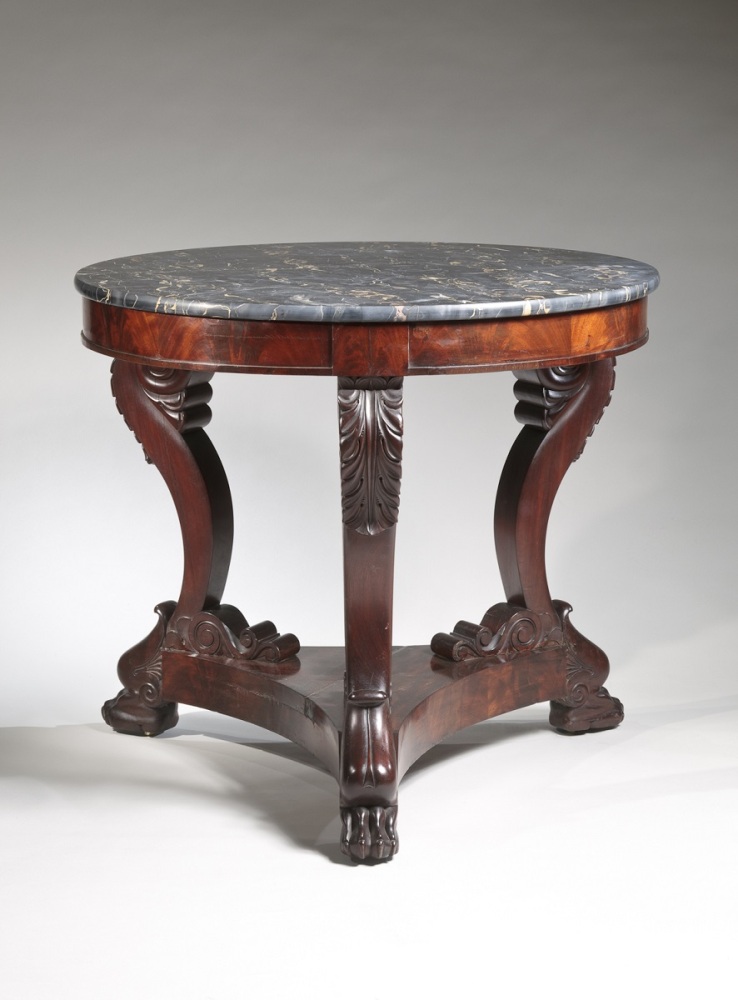 CONDITION: Very Good:  The marble top is a period replacement. An old veneer replacement covers a shrinkage crack across the center of the tripartite plinth.  Small sections of the molding at the bottom of the skirt have been replaced and there are small veneer repairs to edges of the base plinth. The plinth and veneered apron have been re-polished and the solid mahogany carved elements retaining old surface have been waxed.

Two other closely related tables by this maker are known, both with a scrolled foot usually associated with Boston makers Isaac Vose and William Fisk.[1]  Vose died in 1824, several years before the probable date of the present table, therefore it seems likely that it was made by Fisk (d. 1844).  Fisk, originally in partnership with his father in Salem until the former's death in 1797, worked briefly for the Sandersons before moving to Roxbury to join the colony of craftsmen centered around the Willard clock works.  Becoming one of the most prosperous of the group, he is known to have shown four portable rosewood desks at the exhibition of the Massachusetts Charitable Mechanics Association in Boston in 1837.  He first appears in the Boston directory in 1810 and is listed at 841 Washington Street as late as 1835.

The cabriole or “console” legs of this table reflect a move away from the architectonic Empire style into the softer curvilinear style of the French Restauration popular after 1820 in France and effecting American style by the late 1820s.  This style was reflective of the interest in the remains of ancient furniture found at archeological sites in Italy and Greece and designed for parlors in Greek Revival houses, which gained popularity in the United States in the second quarter of the 19th century.  The guéridon, a form inspired by ancient tripod tables, was developed as a lamp stand.  Thomas King, an influential designer, illustrates a closely related table in his Cabinet Maker’s Sketch Book of Plain and Useful Designs (London, 1835) (E. Joy, Pictorial Dictionary of British 19th Century Design, Woodbridge, 1977, p. 494).  The present example is slightly smaller than the standard American center table.