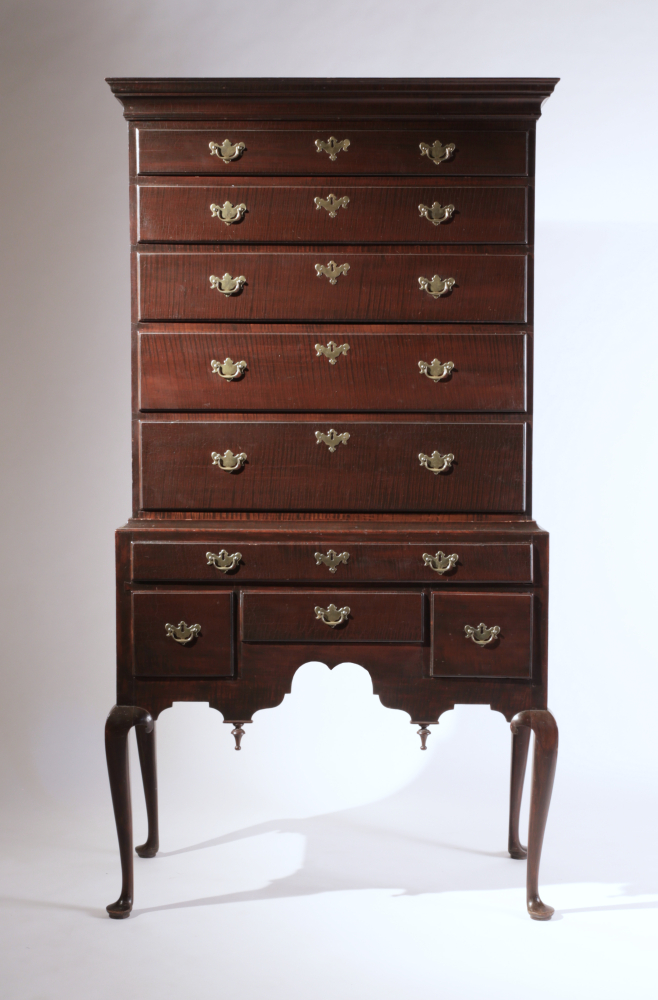 This fine Queen Anne figured maple highboy descended in the family of John Cochran (1745-1805) of New Boston, New Hampshire.  It is accompanied by three documents relating to the Cochran family, including: An Indenture for the apprenticeship of Ephriam Andras to James Cochran, to "learn, teach or cause to be taught... the Trade or Mystery of a husbandman", dated 1784; a Deed for one half of a Pew in the New Boston Meeting House, dated 1796 and signed by Martha Cochran, John Cochran and Nathaniel Cochran; and a Land Deed signed by John Cochran, dated 1798.

The history of the Cochran family is found in the "History of New Boston, New Hampshire" by Elliott C. Cogswell, published in Boston in 1864.  On page 363 the arrival of the Cochran family in America is reported with the arrival of John Cochran and his son under the entry for Nathaniel.  "His father's name was John, and was born in Ireland. He married Lilly Killgore, and came to America in the year 1717. They landed at Brunswick, in the State of Maine, where Bowdoin College now stands. He was, by way of distinction, called John "The Man." Their children were as follows: James, Joseph, Thomas, Nathaniel, Samuel, Elizabeth, and Susannah.  Nathaniel was born in Ireland in the year 1714, was three years old when his father brought him to America. He married Miss Jael Martin, and came from Londonderry to New Boston, it is thought, about 1755.

Condition:  In good condition with original construction throughout and retaining the original cast brass hardware.  The highboy retains a historic and possibly original surface showing deep brown color and a craquelure patina. The turned pendant drops and caps applied to the apron are replacements.