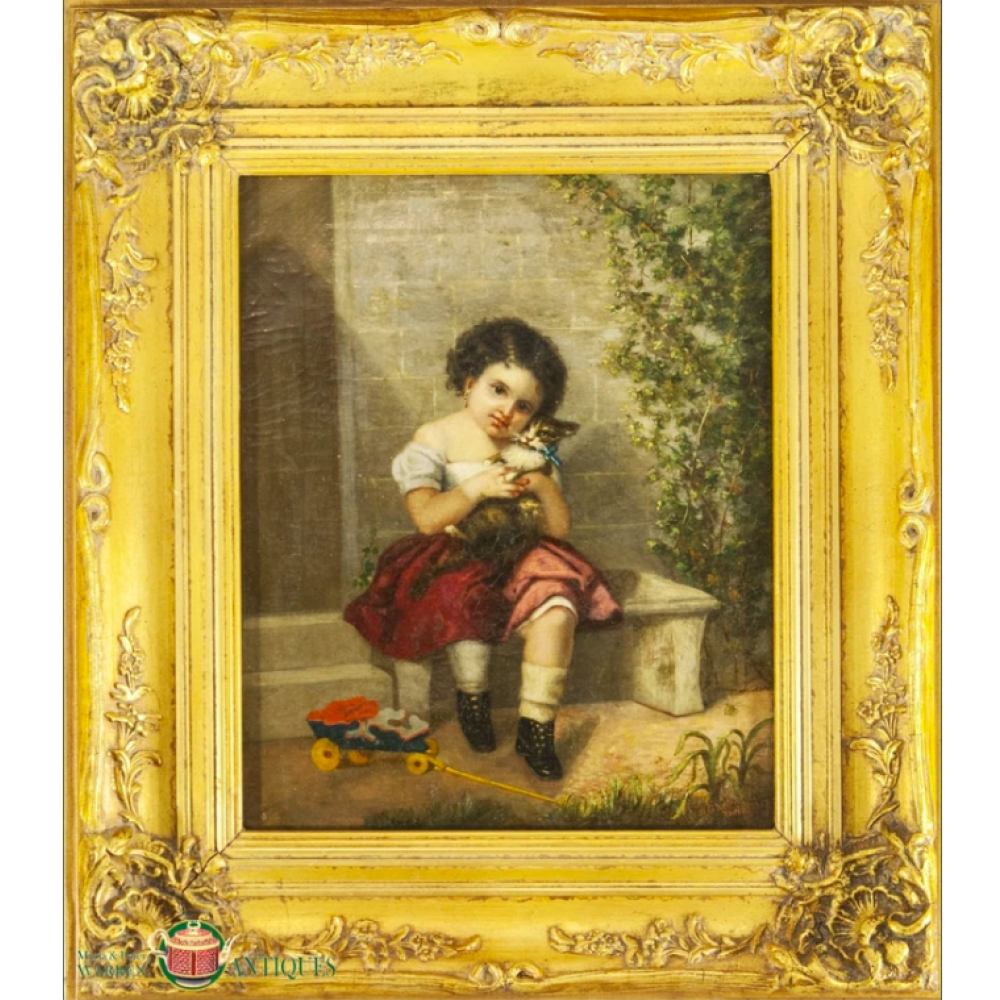 Girl With A Kitten by Elizabeth Jane Gardner

Condition:  Restoration:  small hole at the end of the wagon handle patched.

One of the first American women artists to break the female barrier at the Academie Julian* in Paris, Elizabeth Jane Gardner Bouguereau (1837- 1922) is credited with opening the French ateliers to females.  She was also the first American woman to exhibit and also to win a medal at the Paris Salon*.  Ironically she spent most of her career painting in the style of her husband and mentor, French academician William Adolphe Bouguereau (1825-1905).  She also stopped painting during her married years, 1896 to 1905, but after that produced at least four major paintings a year until she was disabled by rheumatism.

Elizabeth Bouguereau was noted for her idealized, allegorical figure and genre subjects in a smoothly modeled style that reminded some viewers of painting on china.  Her themes were that of nobility, sweetness, and sentimentality.

She was born in Exeter, New Hampshire and graduated in 1856 from Lasell Seminary in Auburndale, Massachusetts, where she received proper ladies training in fine art--dabbling with watercolors.  One of her teachers, Imogene Robinson, became a major influence on her as Imogene was an assertive personality who traveled to Dusseldorf, Germany to study.

Gardner went to Boston to further her art education and decided that she too needed advanced training in Europe.  In 1864, she sailed with Robinson, but was terribly disappointed because not a single art school in Paris admitted women.  She tried dressing like a man as had the French animal painter, Rosa Bonheur, and to do this, had to get special permission from the Chief of Police.  In this garb, she was admitted to the Garden of Plants and later the Gobelins* Tapestry School where she was the first woman student.

Her teacher was William Bouguereau, who through her eyes saw the injustices perpetuated on women.  Because of his intervention, she got into the Academy Julian along with three other women.  She earned much respect as an accomplished painter, and her studio on Rue Notre Dame des Champs became a gathering place for Americans.

Her romance with Bouguereau, a widower with two children, was a subject of much comment, and because his mother objected to the union, they waited twenty years until her death to marry.  They had nine years of married life until his death in 1905. During World War I, she devoted much time to helping French soldiers.

* For more in-depth information about these terms and others, see AskART.com Glossary http://www.askart.com/AskART/lists/Art_Definition.aspx